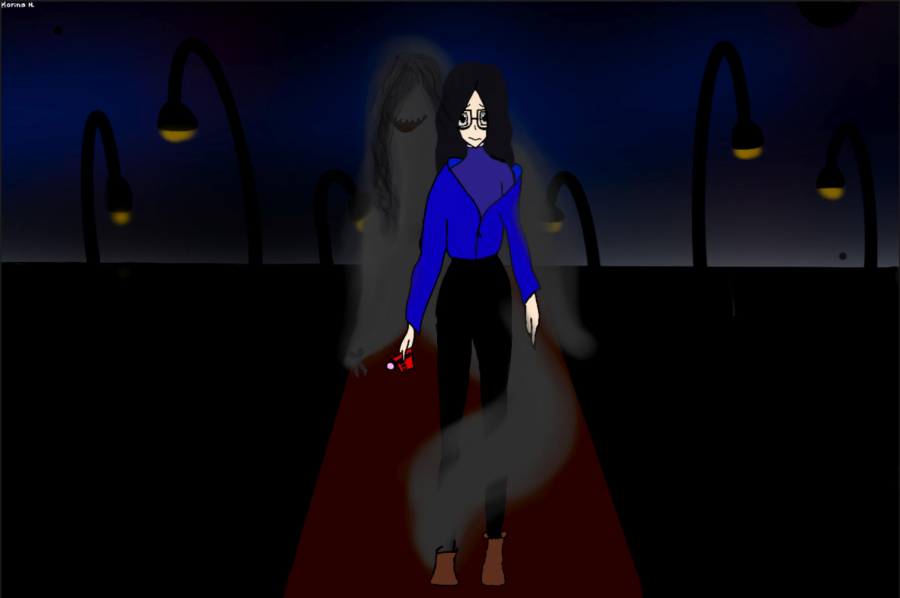 Encountering one of the most popular Japanese urban legends, Kuchisake-Onna.

My name is Myo Watanabe, I’m 19 and live in  Kyoto Japan. I was getting ready for work at 4 in the morning. I usually work at the office for about 5-6 hours a day which isn’t the average working time for Japanese people. It’s not really that important, I just don’t like working a lot. Besides, my family pays for most of my monthly rent, so I don’t really need to worry about getting kicked out. I just like doing my part, and it’s nice to have some extra money. I can also spend the rest of the day to myself since I start work so early.

In fact, I work as a part-time illustrator for horror books and novels. I love Urban legends. It’s probably one of the only things I like about Japan since there are unlimited tales about new myths every day.

I wasn’t always interested in Japanese Myths; however, I did have a sudden change of heart earlier in my life. In fact, the main reason why I moved to Kyoto was actually that it was a hotspot for paranormal activities in Japan. My interest in the paranormal all started 10 years ago when I was 9 years old. Around this time I was living in Hiroshima with my grandma, my older brother, and my mother. Our father passed away as he was saving a civilian from a fire, and I missed him a lot. Mom helped us endure the pain, even though she was hurting a lot more than we were.

Continuing on, it was a normal school day, except that day I was walking home alone, my older brother decided to stay after school since his class was going to have a party. I went up to him and turned my head to the side, gesturing I didn’t want to walk home by myself. My brother patted my head and said, “You’ll be fine, just don’t talk to strangers until you get home.” He smiled and gave me some candy. I put it in my bag and began to walk back home.

Since I was alone, I decided to find a shortcut home and went through some alleyways. I mean, what’s the worst that can happen? I was wandering around for about 5 minutes when suddenly a silhouette appeared from the side of the street.

It was a woman wearing a surgical mask and a trench coat, which isn’t that unusual since people in Japan would often wear masks if they were sick. She made her way over to me and asked “am I pretty?” My head became light, and it felt like nails were stabbing the insides of my stomach.

My brother told me not to talk to strangers but I didn’t want to seem rude, so with a wide smile on my face I replied, “Yes!”

The woman looked delighted. She took off her surgical mask, revealing her mouth slit open from one ear to the other. “Am I pretty now?” She asked, smiling at me with that horrid mouth of hers.

I felt like my heart was about to burst out of my chest. I didn’t know what to do. My voice rising in distress, I said, “Yes?”

“Then how about I make you as pretty as I am!” She pushed me to the wall and thrust a pair of scissors towards my mouth. I grappled with her, fighting to keep the sharp blades from slitting my lips.

Suddenly, something fell out of my bag, it was the candy my brother gave me right before I left. The woman looked over to see what it was. Without any hesitation, I ran out of there. I looked back and I could see her blood-curdling grin smiling at me.  I was lucky to get out of there alive and unscathed. I  ran all the way home and banged on the door until my mom let me in. I had a light mark on my cheek which was left there by that weird woman’s scissors. I was sobbing as I told my mom what happened, her face became pale when my grandma’s face looked even more worried. As my mom was about to call the police my grandma sighed with relief, but also looked worried. She then said, “It’s no use, they won’t be able to do anything about it. Myo you are very lucky to have survived that woman”

“What do you mean Grandma?” I could tell my mom was glaring at my grandma, her eyes saying “Stop misleading her mind” and rolling her eyes. My grandma stared back at her defiantly, and began the story:

Long ago in ancient Japan, there lived one of the prettiest women ever. She was married to a samurai and roamed around town asking young kids “Am I pretty?” they always replied with “yes”. One day she decided to test her loyalty and was deceitful, once her husband found out, he was furious. He wanted her to pay. When the time was right he attacked her with a knife, and slit her mouth wide open from one side to the other, watching as her beauty bleed out. He watched her grieve in sadness and said, “Who will think you’re beautiful now?” Not long after, she died. She soon returned to earth as an enraged spirit who goes by the name of “Kuchisake-Onna, the slit-mouthed woman.”

If you were walking alone in an isolated place she would walk up to you and ask “Am I pretty?” If you say “no,” she would take out her scissors and end your life on the spot. If you say “yes,” she would take off her mask to reveal her foul face and ask you, “Am I pretty now?” no matter the answer your outcome will still be the same. However, a few people found a way to confuse Kuchisake-Onna, when she asks her question you would reply with “maybe”, which would confuse her long enough for you to make your getaway. Grandma told me I was very lucky to manage escaping without saying any of those things. When my brother got home, my mom was furious at him for letting me walk alone.  Understandable, but at the same time, he also saved me. If he never gave me the candy that day, it wouldn’t have distracted Kuchisake-Onna. Who knows where I would be right now.

The next day, my mom and I went to the alley where I encountered Kuchisake-Onna.  I found my bag on the ground right where I had left it, I couldn’t help but feel shivers go down my spine, and it felt like an intense aura was watching me from a distance. I grabbed my bag and went home. We moved to Nagoya not long after, and I never walked back home alone again. My mother hoped that “she” wouldn’t follow us, and that we would be far away from ever encountering her again. I eventually got over that incident and actually got quite interested in these myths. What was their motive, and why was I lucky enough to survive? Don’t get me wrong, I obviously still have some trauma from that incident, when I tell this story some don’t even believe me. I don’t get too curious, as they say, curiosity kills the cat, and I just like to sit and watch from the comfort of my own apartment, hoping to never see her again.

About the rest of Myo’s family, Myo’s Brother works as a private chef, Myo’s Grandmother, unfortunately, passed away not long after Myo moved to Kyoto, Myo’s mother babysit’s children and makes sure to keep an eye on them.

Kuchisake-Onna is a fictional Japanese Urban Legend with many claims of encountering her. Are you willing to find out the truth?